The Savoy was the key place on my tea locations wish list, and, knowing this, the delightful Kate Taylor, sent to me for my birthday a voucher for a Champagne afternoon tea at said establishment.  She is a very generous and generally marvellous person and ideally this tea would have been in her company, but the rather inconvenient fact that she choses to live in her homeland of Australia has made this rather tricky. Therefore I have decided that she and her boyfriend Greg should be awarded the status of honorary tea-takers for this occasion. We had their picture with us at the table and drank to them in the various high quality beverages on offer. 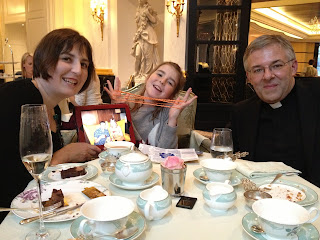 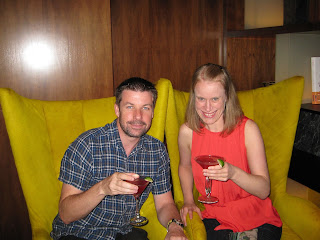 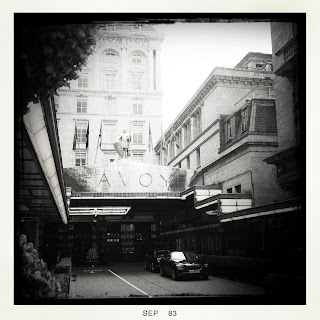 Built on the site of the thirteenth century Savoy Palace, The Savoy Hotel was built in the late 1880s by theatre impresario Richard D'Oyly Carte, with profits from his Gilbert and Sullivan operas. It was London's first luxury hotel, and its innovations included electric lighting, en suite bathrooms and constant hot and cold running water. It was at The Savoy that Auguste Escoffier first came to eminence in the world of cuisine, and where he created many of his most famous dishes, such as Peach Melba, Melba toast and Fraise a la Sarah Bernhardt. (Although later in his career at the Ritz he was horrified by the rise of the hotel afternoon tea: "How can one eat jam, cakes and pastries and enjoy a dinner - the king of meals - an hour or two later?")

The list of emminent guests and performers at the hotel is extraordinary - just a few examples: George VI became the first reigning monarch to dine in any hotel at a private party here; Churchill liked to lunch at The Savoy with his war cabinet; Gershwin gave the British premiere of Rhapsody in Blue here, and when the hotel hosted a ball to celebrate the coronation of the Queen in 1953, the cabaret was under the direction of Laurence Olivier, Noel Coward and John Mills. 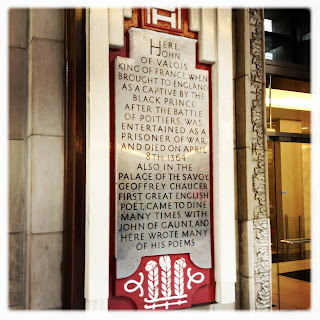 Always a byword for luxury the hotel was extensively refurbished from 2007 to 2010 (at a cost of £220 million...) and not only opulent and elegant it is now also unusually energy efficient and environmentally conscious in its running. 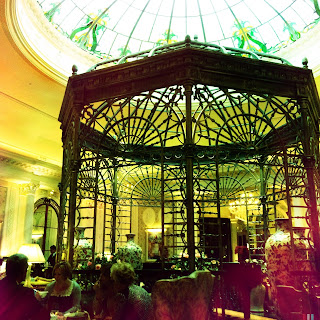 Afternoon tea is now served in the Thames Foyer (which leads to the striking Art Deco Thames Restaurant). This is a large room lit by a beautiful glass cupola which, before the refurbishment, had been covered since the Second World War. It is airy, light, comfortably elegant and provides very congenial surroundings.

Tea was very fine indeed, as one might well expect in such a place. 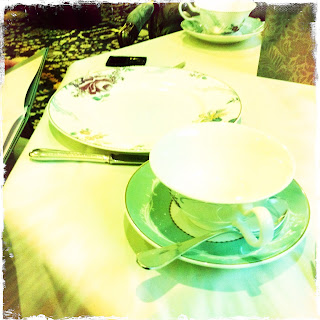 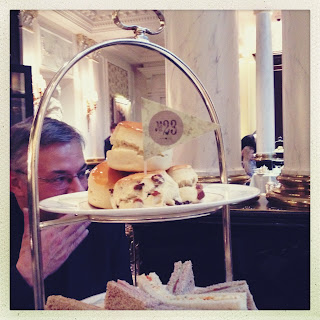 Decisions, decisions... Olivia gets to grips with the 31 varieties of tea on offer: 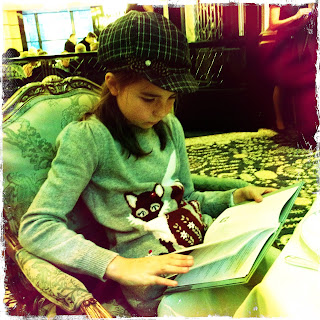 A 'first course' consisted of sandwiches and scones, which were replenished swiftly at our whim. The scones were exceptionally good - in the odyssey so far, I think only Brown's can compete on this score. My only quibble was with the bread for some of the sandwiches, which had some pungent seed in it, which gave it a rather aniseed-y taste, and was not really to my taste.  The following cakes and pastries, though, swiftly made up for this.  Instead of a further cake stand the waitress brought a large tray of elegant rows of some six or seven different petit fours, for us to choose as many as we would like.  The chocolate mouse with salted caramel shortbread was particularly lovely, although the raspberry and chocolate macaron was a close second. To finish a smiling waiter then brought the cake trolley with three different large cakes, to cut slices at our discretion. 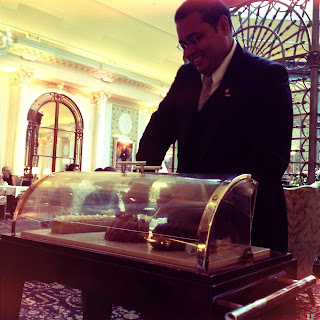 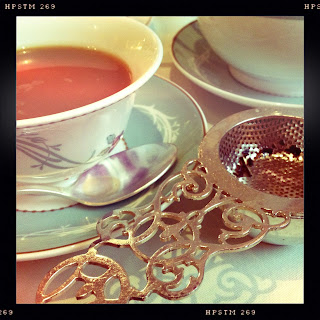 Escoffier was right to be concerned.  I am not sure if I will need to eat again for some days now.

I would also like to commend the rococo tea strainers which I was most taken with - sadly it didn't seem the done thing, though, to attempt to smuggle one out in my handbag. 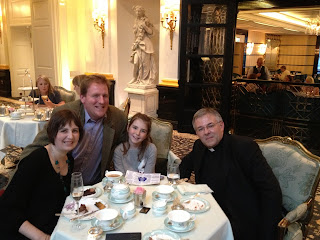 A pianist playing in the central filigree pergola was a pleasing ambient detail of the afternoon, and despite her expression of intense boredom, she played very well. Gershwin, Scott Joplin, Bach - these were all pleasing reminder of different people and times in my life. A piano solo version of David Bowie's "All you young dudes" was slightly more surreal in this context, and when she struck up Kate Bush's 'Wuthering Heights' I did nearly choke on my sandwich. It certainly was an interesting element of the whole experience.

Once again we had excellent company for tea, this time in the person of our friend, Peter, whom we have known since he became the chaplain at Oxford just after we went down. He is someone else who we got to know though going to Lourdes.  Incredibly important in key events of our family life, he was the principal celebrant at our wedding and baptised Olivia, as well as being a good friend and our very generous host on some fantastic Italian holidays, most recently inviting us to join him this August for a marvellous 'Newby Tour' in the Marche. 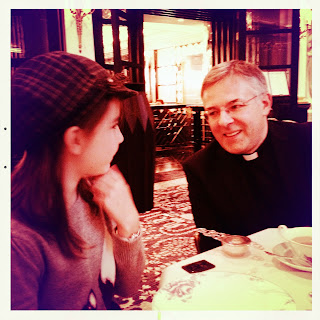 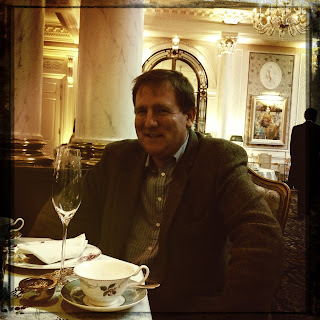 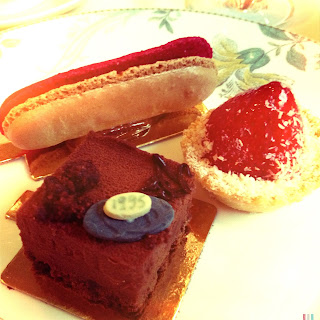 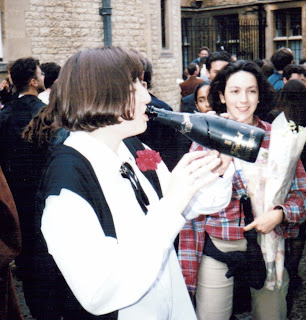 More really should be said of Kate. We met in January 1997 when Kate came to England to be a graduate gap student at King's Bruton, the school where I had begun my teaching career the term before.  She is most definitely a kindred spirit and a very special friend.  She is clever, funny and creative and travelled from Canada to be my witness at our wedding. She has now for years been very happily settled back in Australia, and whilst we have never met Greg, we can only assume that, given he has the combination of good taste and dubious sanity to chose to spend his life with Kate, he must be a very good thing - we would really loved to have had tea with them but Paul says I can't fly to Australia just to do this so we will have to put up with this compromise.

Kate always does a great line in birthday cards so my Savoy voucher was accompanied by this: 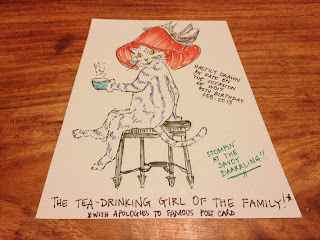 The staff at The Savoy had clearly noticed the birthday greetings on the voucher and so I was one of the ten people in the restaurant that received the celebratory treatment  - the pianist struck up the familiar tune and a phalanx of waiting staff glided to appropriate tables with adorned plates - I didn't feel any need to tell them my birthday was seven months ago, after all this is simply another of my many celebrations - hurrah! 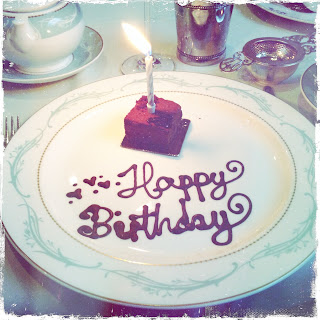 Thank you lovely people of Melbourne for this very fine experience! 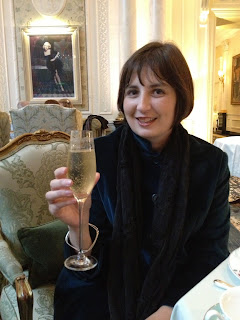 It was also a throw away comment of Kate's that 'you ought write a blog' that inspired this record of the odyssey - she is responsible for much... 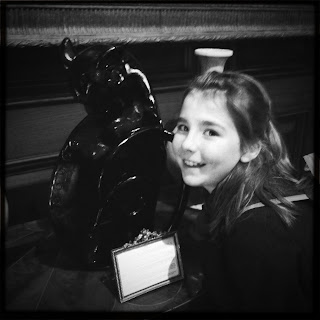 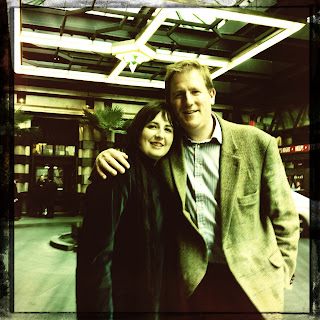 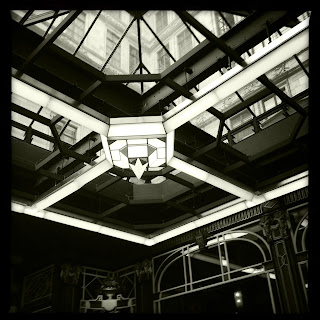 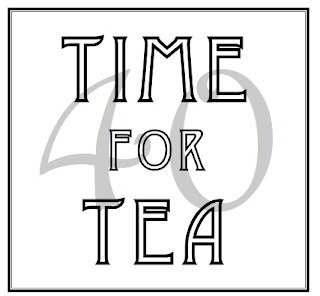